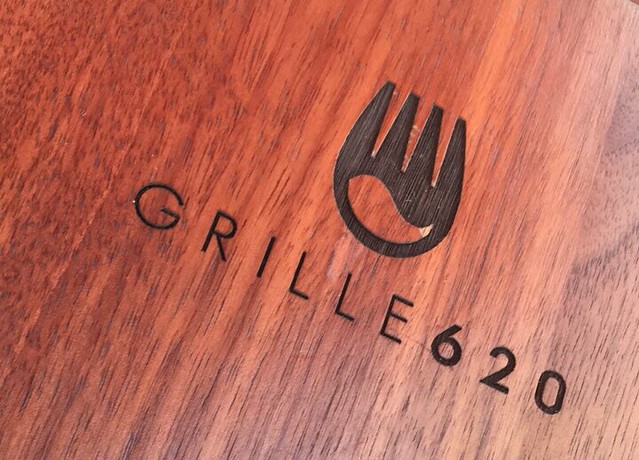 OFV got invited to check out Grille 620 this past Thursday and test out some of their menu selections. Read more to see the breakdown of the dishes we got to try out!

Although OFV focuses more on the dishes that restaurants serve instead of an overall rating of the restaurant, we wanted to give a shoutout to Team Grille 620 for being extra awesome during our visit (chef: Fabio Mura, manager: Tony Smith, server: Chelsea). During this visit we were seated outside (thank goodness it wasn’t as humid or hot) and a band was actually playing (Concert Thursday’s but I think it’s ending soon). Took a peek inside and liked the ambiance (dressy, date-like setting) but their balcony had a more relaxed, casual feel to it… which I preferred.

…and so now, let the food reviews commence… 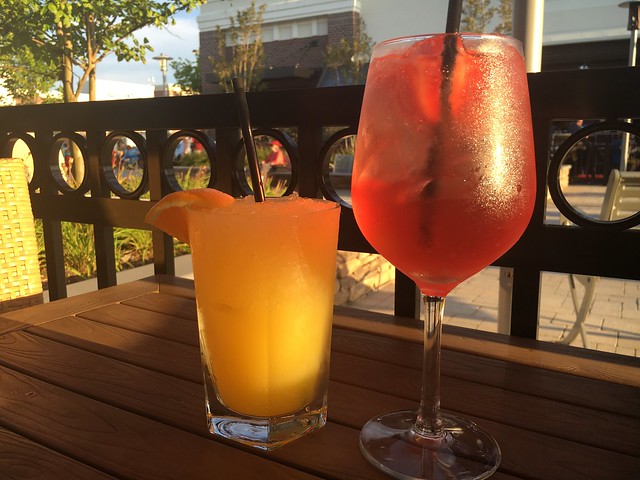 The rose spritzer is something new they added to the menu and I’m so glad they did. It had fresh strawberries in it and it was a very refreshing drink to have… especially during a hot summer day, eating outside. Also, speaking of refreshing, the orange crush kiiiillleeeddd it. At first sip, I thought it was a little bit too strong but the fresh squeezed orange juice balanced it out. 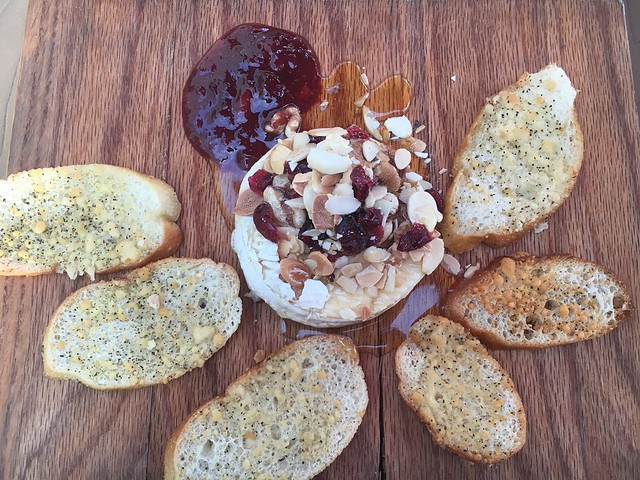 I’ve never had warm brie before… so this came as a surprise when they brought it out to us. Although the jam was slightly sweet for me (only because I think everything is sweet, L liked it though) I still think it paired very well with the brie and crostini. I loved the added touch of almond slivers because it gave it an added crunchy touch to the brie. 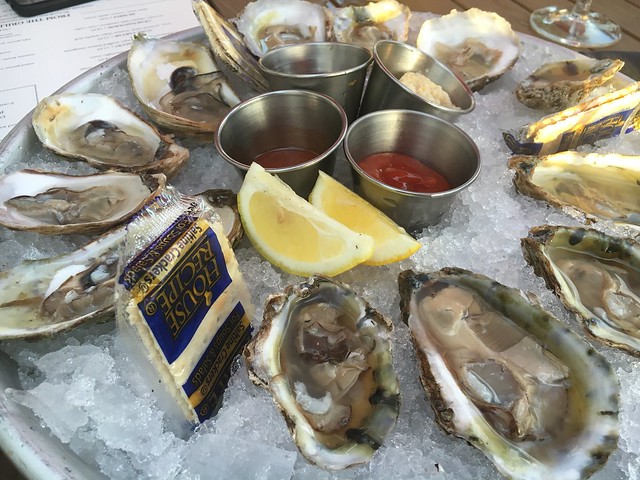 They were sooo fresh. I think we could’ve had a dozen more or so.. 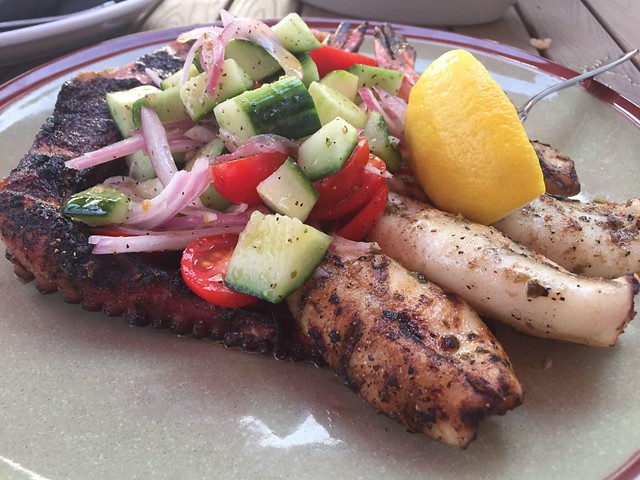 L ordered this one which was a DELICIOUS choice on her part (duh, I gave it a try too). She doesn’t usually like cucumbers but according to her, paired with tomatoes made everything taste more… fresh. Her only complaint about this dish is that it didn’t have as much shrimp as she would’ve liked… but other than that, it gets an A+ review from her. 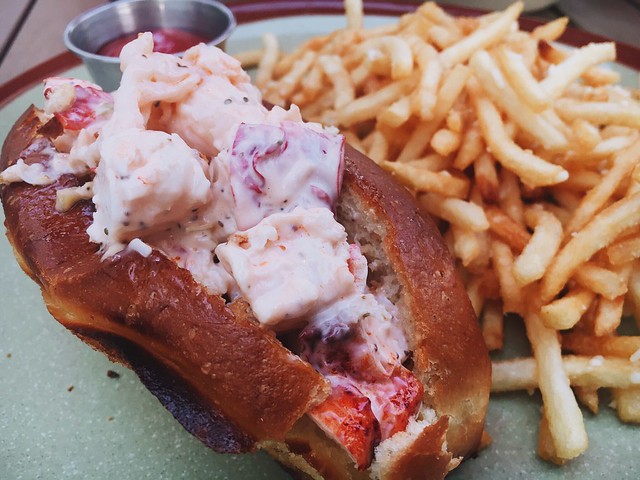 I was a fan of their lobster roll, and it’s definitely in my top 5 favorite ones that I’ve had so far (unfortunately not my #1 though). I think that the type of bread, and the way it’s toasted, buttered, etc. plays a huge part in making or breaking the quality of a lobster roll… and they did it! The bread to me was perfectly toasted and buttered… and it was thick enough that it didn’t fall apart from the lightly dressed with lemon aioli lobster in it. I’m not gonna lie… I ended up finishing up the lobster in it and leaving the bread but only because… carbs… and I was really full (because I was too busy trying out everythingggg)

…and on a side note, the fries that came with this as a side was HEAVEN. I looooovvveeee skinny fries! Too bad I was too full to demolish it or I most likely would have.

Sides:
*we original didn’t order any sides… and the chef noticed that we needed some so he chose these 2 sides for us… (each side is good for 2 people) 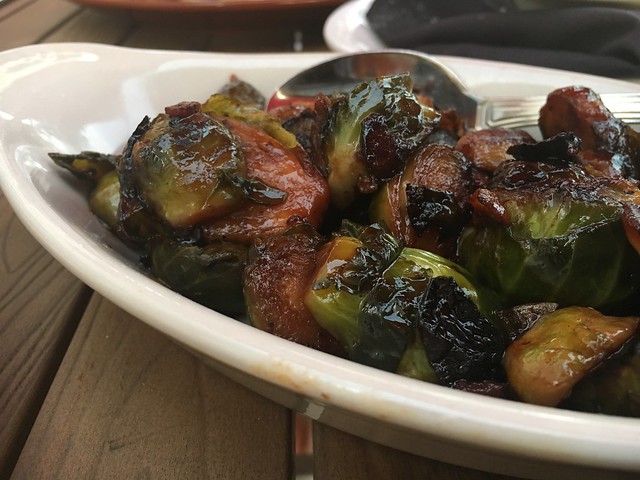 Charred Brussels Sprouts- I. LOVED. THIS. I think I pretty much destroyed this before eating anything else. It was perfectly cooked (grilled?) and seasoned. I have no idea what kind of seasoning was put into this (teriyaki?) but it’s a MUST TRY if you love brussel sprouts as much as I do. The seasoning had a sweet taste to it but it was PERFECT (ok, for me that’s saying a lot because see note above about me not liking sweet things). This goes in as one of my favorite things about this restaurant. I’m so glad that the chef read my mind and decided to add this. Highly recommended. 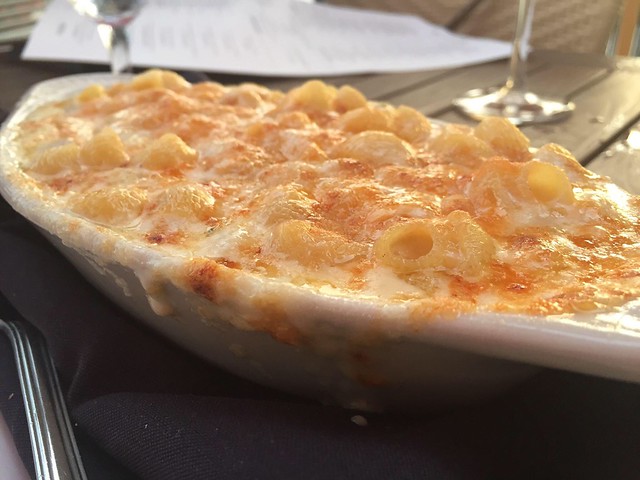 Truffled Macaroni & Cheese-I don’t remember the last time I ate mac & cheese… and it’s not because I don’t like it… but there’s always something better on the menu or an alternative to it. I probably would’ve never ordered this from the menu if it was up to me… but I’m glad that the chef decided to add this to our order. First of all, I LOVE CHEESE… and this mac & cheese was CHEESE HEAVEN. Truffled anything is pretty great in my book… and I don’t know why or how I’ve waited this long to try Truffled Mac & Cheese — so if you’re a big fan of truffled things… and mac & cheese, this is a MUST try. 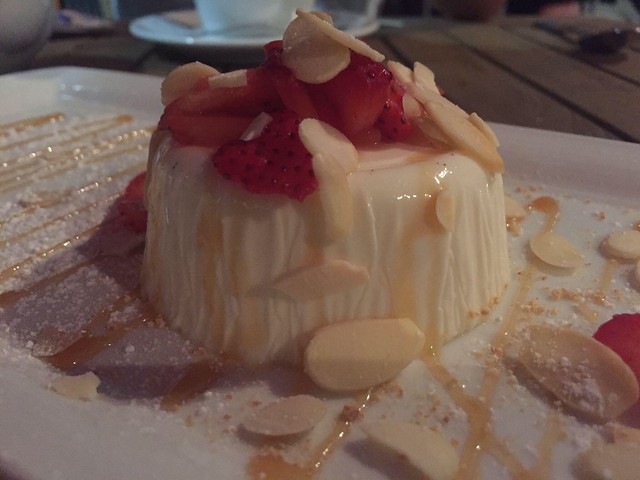 By dessert time, I thought I was going to explode… but alas, the dessert menu was placed in front of me and I couldn’t say no. I mean… who says no to dessert, right? I needed something light yet flavorful… and the right amount of sweet. I had no idea what to choose because I literally wanted to have everything on the dessert menu… but my stomach was saying NO in big, bold letters. I had no idea what Sweet Milk Panna Cotta was since I’ve never even heard of Panna Cotta before… but the description sounded good and so I gave it a shot. And let me tell you, it was perfect. It was all the things I needed right then and there. It was light. It was flavorful. It was the PERFECT amount of sweet. It reminded me of something between… a very bougie jello and flan topped with almonds and fresh strawberries, with a side of caramel. It had that gelatin type texture, flavored with sweet milk. The added caramel and strawberries made it more heavenly, and the almonds added a crunch to it. I’d have to add this to my next favorite thing about this restaurant. Highly recommended.

Definitely check this place out if you’re ever in the DMV area. You’ll get awesome service paired with DELICIOUS selections.